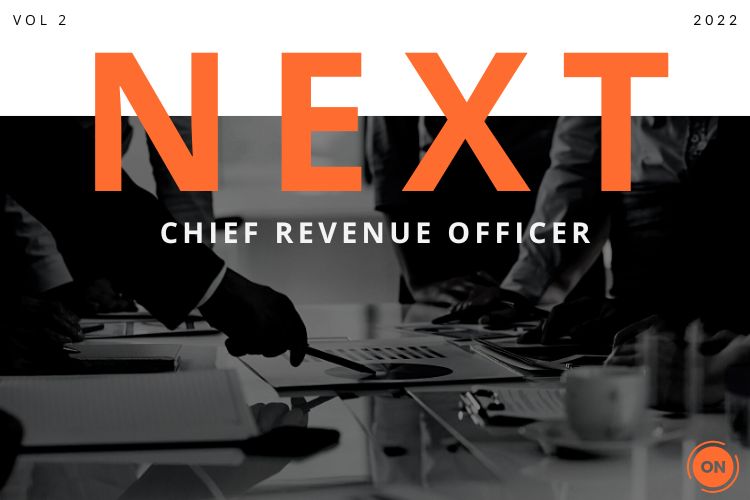 The Next CRO: An Evolving Profile

With more than 20 years in executive search in sales and chief revenue officer (CRO) engagements, Aaron Clark, partner at ON Partners, collaborates with clients in building out their commercial capabilities to drive top-line revenue, improve the sales process, and structure and implement new GTM strategies.

The CRO has emerged as a pivotal position on the executive leadership team. For volume 2 of our NEXT Series, Aaron outlines how the role developed and has evolved, the key attributes the role demands, and the process of identifying the ideal candidate.

{Want more of the NEXT series? Check out volume 1 exploring the evolution of the supply chain leader and volume 3 identifying the evolving profile of the next ESG leader.}

From Head of Sales to CRO: An Evolving Profile

The chief revenue officer essentially owns everything that goes to market – sales, account management, customer success, and sometimes marketing as well. Fifteen years ago, there was no such position as the CRO.

The role was known as the head of global sales or VP of sales, depending on how companies defined the role. But as executives in that position continued to see other key functional experts reporting directly to the CEO, they wanted a seat at the executive table as well.

According to Aaron, “When I began in executive search over 20 years ago, I quickly realized no one was just doing sales leadership searches. Practices were focused on CEO, CMO, CIO, CFO, but not on head of sales.”

“I helped start a sales leadership practice at my previous firm and later joined ON Partners because it was a pure-play executive search firm doing more focused, quality work and was more hands-on with clients. I’ve continued to focus on this function and have carved out a niche to aid the CRO and advise on how to build out their GTM teams.”

The Impact of SaaS

Over the last 10 years or so, SaaS has transformed the sales channel and the head of sales role. Whereas enterprise software implementations comprised multimillion-dollar deals and lengthy implementations – resulting in “sticky” products that were difficult to unwind – SaaS is essentially the opposite, with light implementations happening practically at the flip of a switch.

As a result, the customer success role emerged, and SaaS products have become tied at the hip to marketing. The goal of driving net new sales and then flipping a customer over to an account management team to handle upselling and cross-selling has shifted to holding onto new customers because of the ease with which they can go to a competitor.

The head of sales title has become broader, now encompassing all revenue-generating routes to market, and having a strong sales operations person has also become critical in the SaaS environment. The CRO needs someone who can dive into the ops side, not just back-office tools but also market segmentation, direct sales, and channel strategy, sales rep compensation, and coverage models.

Today’s CRO must have operational depth and an understanding of what tools and processes need to be put in place to scale a business vs. throwing a lot of bodies at a solution. In areas like SaaS in particular, it’s important to think more strategically about the business.

While charisma and the ability to motivate teams are important, the CRO needs to be able to sit with the executive leadership team and lay out a go to market strategy for the next six to 18 months. Having a depth of metrics-driven operational knowledge akin to the COO and the ability to forecast accurately is key – and represents a very different sales leader profile than it used to be.

The CRO role demands different skill sets depending on the client. For a smaller growth company, someone who thrives in an early-stage environment and enjoys building things from scratch – hiring, putting key tools and processes in place – requires a unique person who is good at the heavy lifting required to acquire market share and evangelize.

That person can be different from one needed by a more established company doing $10 million to $20 million per year in revenue, who understands how to improve on and tweak the work of his or her predecessor. For a $100 million-plus organization, the CRO needs to understand how to lead large teams in a complex, matrixed environment selling across multiple market segments on a global basis.

That said, certain qualities remain consistent. Every CRO must know how to hire the right team, lead good people, and have a strong sense of how to build and scale a company.

In kicking off a CRO search for an enterprise company, it is critical to understand the four or five key competencies are for the ideal candidate. SaaS experience? High growth expertise? Scale? Domain knowledge?

That wish list can then be used as a benchmark when interviewing candidates, and the hiring team can compare and contrast based on those attributes.

Getting four legs of the proverbial stool is a home run, but more often a candidate will possess three of four or five identified attributes. They may not know a particular industry very well, for example, but the team understands they can get the candidate up to speed.

The process involves defining the profile based on where the company is in its lifecycle and where it is headed, and that’s different based on the size of the company, whether it is private or public, its industry, and other factors. The ideal candidate is someone who aligns as closely with the preferred profile as possible.

Companies are doing their best not to let current market volatility detract from where they want to be three to four years from now. While they’re continuing with growth and hiring plans, they’re being more careful to preserve cash flow and perhaps hiring fewer people. Whereas a company, particularly a smaller one in Series A-C, may have had the budget eight months ago to hire 40-50 people, now it’s 15-25 people.

While the last two years have been crazy, with hiring like a spigot coming out of COVID, companies public and private alike have hit the reset button now that the franticness has left the market and valuations are back in line where they probably should be.

Companies are being more realistic and strategic about their growth plans, something being echoed in the VC community. Security is one area that remains in high demand since virtually every company needs it, and demand in that sector is high.

For more information about ON Partners and recent executive search work in the first half of 2022, read the recently published Executive Talent Report.

{Want more of the NEXT series? Check out volume 1 exploring the evolution of the supply chain leader and volume 3 identifying the evolving profile of the next ESG leader.}