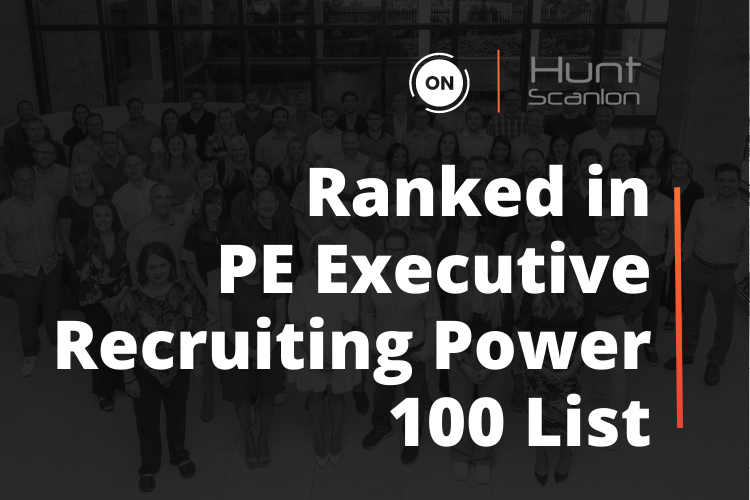 ON Partners is named, for the third consecutive year, to Hunt Scanlon’s annual roundup of the 100 most prominent executive search firms serving the private equity sector

In the last year, ON’s experienced consultants have placed a diverse group of C-level executives and board members at a wide range of PE and growth-backed organizations, including Arrowstream, Marlin Equity Partners, Lower, Vena, Campspot, 365 Retail Markets and more.

With valuations higher than ever and competition for deals intense, bringing the right executive to the team to unlock a brand’s potential has never been more critical, especially as the demand for leadership talent increases as 2022 continues.

With growth and private equity firms deploying capital at record-setting rates, the need for key executives to lead these companies is vital. The sharp growth in market demand has made it exceptionally difficult to acquire top talent, and the companies that are successfully bringing on top-tier executives are those moving swiftly and decisively, often exceeding compensation expectations. Sought after executives will not only have multiple offers, but counter offers as well.

“Product and digital leader roles are at the top of the list right now,” according to ON partner Lynda Robey. “Many businesses are broadening the scope of responsibility for these leaders to improve agility and responsiveness in this rapidly changing environment.”

ON’s Jeff Hocking echoed that comment, noting, “CEO and CFO are always in demand for PE backed companies, but we are seeing a big increase in chief product officer searches.”

With PE firms flush with cash and competing with SPACs for a limited number of deals, the operating partner role has arguably never been more important – and demanding. While the OP role is typically a step before retirement given the level of experience needed, operating partners are telling ON consultants they’re working harder now than ever before, balancing the role of coach with being deep in the weeds of three or four companies in a hyper-competitive environment. With the pressure to maximize current portfolio companies/valuations, the OP role is even more in demand.

According to partner Tindall Sewell, “It’s not just about your network of CEOs who can step into the OP role, it’s asking, ‘What’s your network as you’re tapping into new industries? Things are moving so fast with PE firms acquiring companies, it’s critical to have people lined up who are highly qualified and can immediately jump in.”

In addition to the Private Equity Recruiting Power 100 list, ON Partners was recently, also again, named by Hunt Scanlon as a top 20 executive search firm and ranked in the top 50 by Forbes Magazine as one of America’s Best Executive Recruiting Firms.