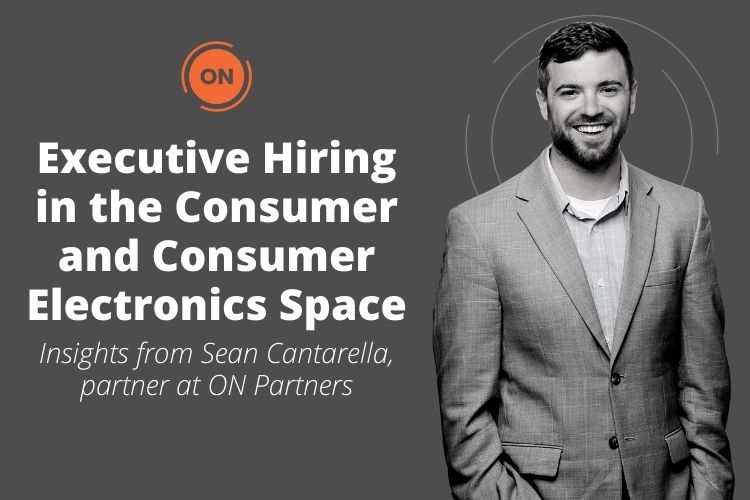 Sean Cantarella Shares Insights on the Explosion in Gaming, Top Search Assignments and How Search Runs in the Family

As a partner with ON Partners, Sean Cantarella specializes in placing senior executive talent primarily in the consumer products and services, consumer applications, and gaming sectors. He works with public companies as well as portfolio companies of PE and VC firms.

Sean shares insights here on the growth of the gaming space, the search for top talent, and how search for him is a family business.

What would you tell future clients that they need to know now?

Gaming is going to be bigger than anything we have seen before. In 2021 the gaming market was valued around $200 billion. It’s already massive but most executives today who are 45 years of age and older didn’t grow up with video games. The next generation did, though, and there is a huge emphasis on it.

In 2027, the gaming market is expected to almost double. With middle- and high school kids joining esports teams, cloud gaming, the metaverse, and esports stadiums going up, there will be a massive boom in the next five years in all types of games. You already have multiple investors interested in the space, including several professional athletes. If companies can create a way to tie in gaming, it will bring big rewards. This could be in hardware or software but also in seemingly unrelated areas.

For instance, State Farm’s marketing team understands gamers are incredibly passionate and enthusiastic. They also know gaming is an effective way to reach younger audiences, even if people are just watching games on Twitch. State Farm partnered with the game publisher of NBA 2K22 to debut a virtual version of Jake from State Farm as a non-playable character in the game wearing his normal State Farm attire. Players could then interact with Jake virtually. The reaction from players was positive and it helped build awareness for the insurance giant.

To those still skeptical of gamers, you might want to rethink how you view this industry. I’d suggest companies create some connection to the gaming market soon if they haven’t already. There is a massive market to tap into.

Where are you finding executive talent for consumer and consumer electronics positions?

We’ve been looking less and less at Big Tech because it tends to be overpriced and over siloed. Entrepreneurial, hands-on individuals with a mix of strategy and execution experience are most attractive for executive leadership positions. The scale has seemingly tipped to wanting a more technically adept senior leader, and the need to understand the possibilities of a product is greater.

For example, the SVP Technology for Viking Cruises came from Expedia and what was particularly attractive about this candidate was his knowledge of architecture and platforms, particularly in the travel industry, to help bolster Viking’s consumer experience. The ability to dive in deep and get up close to the details was very appealing, along with his ability to see things strategically. This leads to more diverse teams in terms of thought and strategy.

What have been some of your favorite assignments and why?

Every search is unique and it’s always hard to pick favorites. A few that come to mind include Logitech’s Head of Inside/Digital Sales; Samsara’s VP Technical Support, and Netgear’s CTO. Logitech has done well over the last few years and is working on some really cool tech – and they are now every bit B2B as they are B2C. This individual was going to come in and build out an entire inside sales team from scratch as they built out their B2B team. It was an opportunity for someone to really own a substantial piece of Logitech’s growth and make an immediate impact on the world during the middle of the pandemic.

Samsara was a pre-IPO company at the time, growing over 200% YoY. They were looking for someone to scale their technical support organization, especially as they had more and more IoT devices out in market. They needed an individual who had previously dealt with massive growth but also understood how to scale for the future. At the time Samsara was less than five years old and people needed to be educated on the market and the company. We brought in someone from Amazon Robotics who has done a tremendous job scaling to help them through their recent IPO and hopefully for years to come.

For Netgear, we were targeting a software CTO who could help the company transition from a traditional hardware company into a services company as many others have done. It was a newly formed role to help lead, build and drive a core software team in defining unique, additive and frictionless software experiences that would further Netgear’s best in class device platforms. We’ve seen multiple companies successfully make this transition.

What have you learned over the past year?

We have been in a candidate’s market, meaning candidates have multiple opportunities and have had their pick of the litter, so to speak. With multiple options, they have been able to play the field, ask for higher compensation, and sometimes drive the process.

This past year, the story a company was able to share along with flexibility in compensation were two of the biggest factors for attracting the best talent. Alongside these two factors, the biggest lesson learned was how important it is to have an executive search firm that creates a better experience for the candidate – following up, staying on top of each item, constant conversation to gauge their thoughts/interest. A better experience led to improved engagement and a smoother process.

This experience leads to increased value for our clients. With candidates constantly fielding other opportunities, communication and trust with a candidate allowed us greater insight into the viability they would become a hire.

In the middle of the search process with a candidate with whom I’d built a very strong rapport, I found out the opportunity we were discussing was number two on his list. We continued with the interview process with the hope of winning him over. Ultimately, he took another offer. Knowing this early on helped our client engage with multiple other candidates, leading to a successful placement of another qualified candidate within days.

How did you get into executive search?

Most people don’t even think of executive search as a career until they somehow fall into it. I actually found my way into executive search because it runs in the family. I’ve grown up with a father who has spent several years in the business. Throughout some key developmental years for me, I saw firsthand how a search partner could be a true consultant to clients. Whether he was helping with homework, teaching me how to speak in front of a crowd, or play a sport, my father took the same type of consultative approach towards me as he does with his work. It’s easy to get lost in this business, but I’m glad I was groomed well – whether I wanted to be or not.

In the Summer of 2012, I began an internship at Korn Ferry Futurestep, where I learned the ins and outs of research. Before long I was doing full life cycle recruiting at Korn Ferry before finding my way to ON Partners to polish my skills and continue growing my career in executive search.