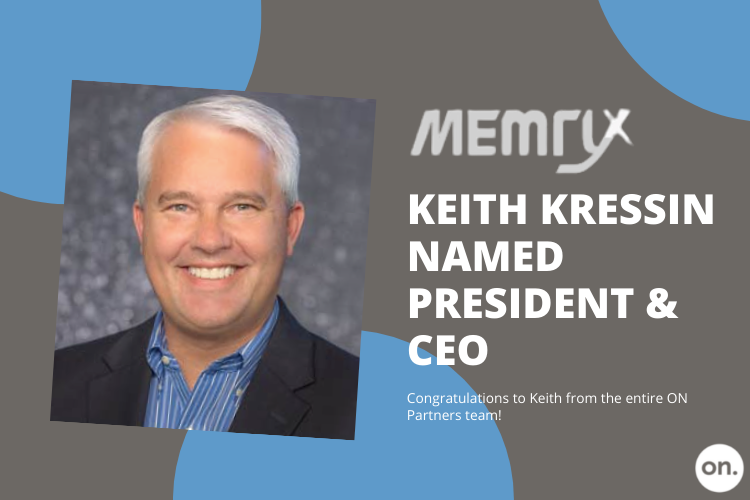 Kressin brings more than two decades of leadership experience in the semiconductor market, most recently managing Snapdragon product development and related business lines as senior vice president and general manager of Qualcomm’s Compute and Cloud division. In that role, he was responsible for several of Qualcomm’s key growth initiatives, including XR (AR/VR), compute (PC/tablet), AI, and gaming.

In his new role, Kressin will lead MemryX’s evolution from R&D to product manufacturing and customer delivery, while scaling the company for success. With Kressin’s appointment, company co-founder and founding CEO Dr. Wei Lu will become the company’s CTO and thus shift his full attention to technology development.

The company was co-founded in February 2019 by Dr. Lu and Dr. Zhengya Zhang, both professors of electrical engineering and computer science at the University of Michigan. Lu, co-founder of Crossbar, Inc., brings expertise in neuromorphic computing and in-memory computing systems including the breakthrough Memory Processing Unit (MPU) used by MemryX. Zhang brings expertise in VLSI circuits and systems for computing, communications and signal processing.

“Since MemryX’s founding, we’ve primarily focused on building what would be a transformative technology,” Lu said. “We saw that as the edge becomes increasingly intelligent, enterprises would need chips that are easy to program and power-efficient while providing higher throughput. Now that MemryX is ready to scale, bringing on a leader like Keith, with his depth of rich experience, will make a huge impact as we ramp our business, enter new markets and engage with more customers. He’s a superstar.”

MemryX is developing a radically new in-memory compute architecture for AI applications, providing drastic improvement over existing computing architectures with unmatched power and performance for a number of AI-intensive applications. The company demonstrated its first MPU at CES 2020 and is currently sampling its second MPU to select customers.

“MemryX’s compute-in-memory solutions address a great market opportunity across a number of verticals,” said Patrick Moorhead, founder of tech analyst firm Moor Insights & Strategy, “I’ve known Keith for many years and know his depth of experience and ability to deliver substantive results. I expect that with the addition of Keith as president and CEO, the MemryX leadership team will be well positioned as it advances into production at scale and customer engagement.”

Kressin, who joined Qualcomm in 2008, held a series of business, product and strategic planning roles while with the San Diego-based chip giant. In those roles, he led Snapdragon roadmap planning, strategic planning, and managed all application processor technologies such as AI, GPU, CPU, camera, audio, and memory. Prior to Qualcomm, Kressin spent more than eight years at Intel managing chipset products and mobile marketing.

“Over the course of my 20-plus-year career in the semiconductor industry, I’ve seen the industry transition from general processing cores such as CPUs, to more dedicated cores, such as DSPs, ISPs (cameras), CV engines, sensor hubs, and most recently dedicated AI cores,” Kressin said. “Nearly every processing function is increasingly reliant on AI. AI cores need to be highly scalable, easy to program, flexible, and incredibly efficient. This is what MemryX has proven in working silicon and the company intends to be ready with production silicon in 2022. I’m thrilled to join as CEO and be given the opportunity to help MemryX grow and support customers using AI across a broad swath of industries.”

ON Partners consultants Bryan Buck, Matt Mooney, and Sean Cantarella are proud to have partnered with MemryX and Keith Kressin on this successful placement. View more CEO and board placements here.

MemryX Inc. is a fabless semiconductor company that designs edge AI processing solutions powered by a proprietary compute-in-memory technology and data-flow architecture. By combining high performance and accuracy with low system power and costs, MemryX solutions are able to power AI needs for a number of industries, including auto, robotics, security, and a wide range of industrial and consumer applications. MemryX is backed by leading investors including HarbourVest, ARM IoT Fund, eLab Ventures, M Ventures, and Motus Ventures. MemryX headquartered in Ann Arbor, Michigan, with offices in Taipei and Hsinchu Taiwan.