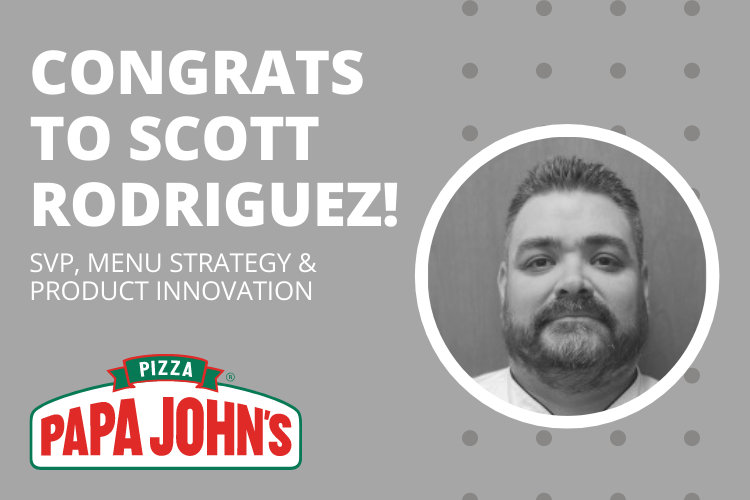 Rodriguez brings to Papa John’s over 20 years of culinary innovation and menu strategy expertise for leading national restaurants. He joins Papa John’s from BJ’s Restaraunts, Inc. where he spent over ten years and most recently was the SVP, Culinary and Kitchen Innovation. Prior to that, Rodriguez spent over seven years at Original Roadhouse Grill where he was the Food and Beverage Manager.

ON Partners consultants Tim Conti, Josh Nathanson, and Bryan Buck are proud to have partnered with Papa John’s and Scott Rodriguez on this successful placement. ON has collaborated with Papa John’s previously on the appointment of Ann Gugino to Chief Financial Officer.

Papa John’s International, Inc. (NASDAQ: PZZA) opened its doors in 1984 with one goal in mind: BETTER INGREDIENTS. BETTER PIZZA. Papa John’s believes that using high quality ingredients leads to superior quality pizzas. Its original dough is made of only six ingredients and is fresh, never frozen. Papa John’s tops its pizzas with real cheese made from mozzarella, pizza sauce made with vine-ripened tomatoes that go from vine to can in the same day and meat free of fillers. It was the first national pizza delivery chain to announce the removal of artificial flavors and synthetic colors from its entire food menu. Papa John’s is headquartered in Louisville, KY and is the world’s third largest pizza delivery company with more than 5,300 restaurants in 48 countries and territories as of June 28, 2020. For more information about the Company or to order pizza online, visit www.PapaJohns.com or download the Papa John’s mobile app for iOS or Android.