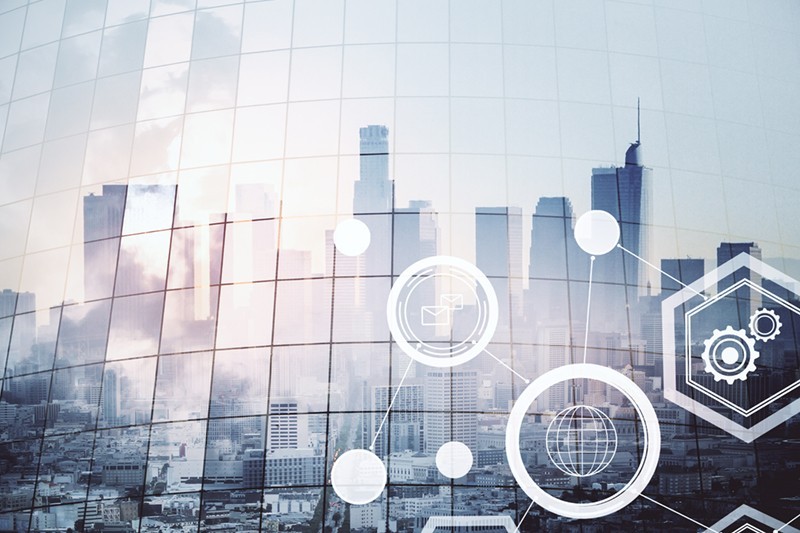 NEW YORK HIRING OUTPACES BOSTON, BAY AREA IN Q4 AND 2018 OVERALL, ACCORDING TO LATEST DATA FROM ON PARTNERS

BOSTON, MA – February 27, 2019 – ON Partners, the results-driven retained executive search firm, today announced the results of its Digital Jobs Index for the fourth quarter and full year of 2018 for the nation’s three largest tech centers of Boston, New York City and the Bay Area. In Q4 and 2018 overall, hiring in New York surpassed Boston and the Bay Area.

Boston’s tech hiring strengthened in the fourth quarter with growth of 2.9%. For the year, employment at the metro area’s 100 largest software and internet companies increased by 9.2% to approximately 65,800 employees. Boston’s fourth quarter numbers were heavily influenced by increased hiring at Oracle and IBM, two legacy software companies whose hiring was fairly soft in the first three quarters of the year. For the year, Wayfair and Amazon grew their local headcounts the most in 2018, with no other companies coming close to their headcount additions.

“Hiring in the software and internet industry for calendar year 2018 was remarkably strong and shows no signs of slowing down,” noted John Barrett, partner at ON Partners. “There certainly appears to be more economic uncertainty at a macroeconomic level, but to this point the unease hasn’t had an impact on digital hiring.”

Fourth quarter hiring at New York City’s 100 largest digital companies increased by 3.8%, to approximately 79,700 individuals. For the year, hiring grew strongly (13.4%), more than either Boston or the Bay Area. New York has seen consistently strong hiring from the likes of WeWork, Google, Amazon, Compass and Uber, and the New York Times recently noted that the majority of these companies plan to continue to increase local headcounts, helping to further solidify tech as a critical part of the city’s economy.

The Bay Area’s digital hiring slowed somewhat in Q4 but still increased by a respectable 2.1% to almost 238,100 employees. The metro area, which includes San Francisco and Silicon Valley, grew its hiring for the year by 12.7%. Google, Apple and Facebook showed the largest employment increases during the year.

When considering a company’s eligibility to be included in the top 100, ON Partners considers the number of local employees in each city, employment growth and importance to the local technology community. The Digital Jobs Index represents the quarterly headcount change among those 100 companies within a 50-mile radius of each metropolitan area. ON Partners’ Digital Jobs Index is current as of December 31, 2018. 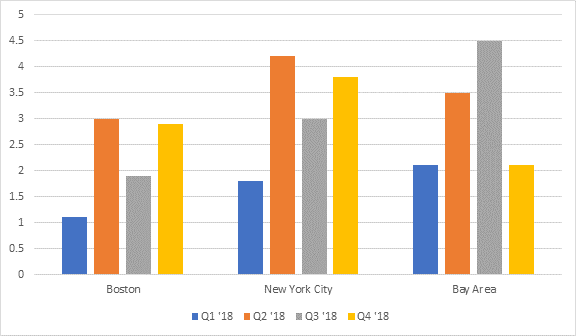 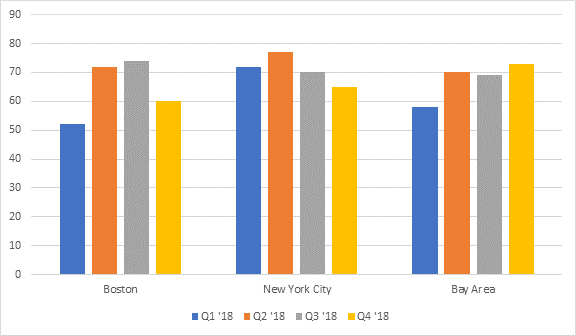 ON Partners identified the leading 100 software and internet companies in Boston, New York City and the Bay Area. When considering a company’s eligibility to be included in the top 100, ON Partners looks at the number of local employees in each city, employment growth and importance to the local technology community. The Digital Jobs Index represents the quarterly headcount change in LinkedIn among those 100 companies in each metropolitan area within a 50 mile radius. ON Partners’ Digital Jobs Index is current as of December 31, 2018. 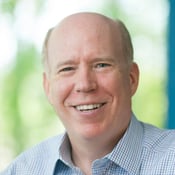 ON Partners recruits game-changing executives for world-changing companies. ON Partners was founded in 2006 by like-minded executive search professionals desiring to establish a more client centric alternative to the large multi-service global firms they were leaving behind. Growing quickly ever since, we have recently been named to the INC 500/5000 List and as one of the Top 25 Retained Executive Search Firms in the U.S. Specializing in recruiting C-suite, Board and Vice President/Senior Management talent,our Partners have a long successful track record of building world class management teams across broad industries. For more information, visit www.onpartners.com.