NEW YORK/BOSTON – February 21, 2017 – ON Partners (www.onpartners.com), one of the country’s fastest growing retained executive search firms, has compiled the results of its quarterly Digital Jobs Index. Both Boston and New York had their worst hiring figures in the past five years. New York’s digital headcount increased 11.0% in 2016, down from 17.3% in 2015. Fourth quarter headcount only went up by 1.5%. Boston’s headcount saw a rise of 10.1% for 2016 compared to a 13.9% increase in 2015. The city’s fourth quarter employment increased by a measly 0.9%.

There are likely multiple causes for the slowdown but one is most certainly the well-reported decline in venture capital investing over the past six months. New York’s hiring scene has been steadily eroding for the past 18 months while Boston’s took a sharp downturn in the last 6 months. In fact, both cities saw less than 50% of companies in our survey increasing their headcount over the past two quarters, another sign that many companies are increasingly keeping a closer eye on their payrolls.

There were a number of notable M&A transactions in the digital sector this past year. In many of these instances, the acquisitions led to a noticeable decline in headcount. Boston saw a number of companies being sold in 2016 including Constant Contact (Endurance), Demandware (Salesforce), Fiksu (Clickdealer), DealerRater (Cars.com), Valor (Follett), Smart Destinations (Big Bus) and Gemvara (Richline). New York City had its fair share of M&A transactions as well: Operative (SintecMedia), Gilt (Hudson Bay), Yodle (Web.com), Jet.com (Walmart), Tapad (Telenor), HookLogic (Criteo), Olapic (Monotype), CityMaps (TripAdvisor) and Gawker Media (Univision).

ON Partners’ John Barrett observed, “We believe the recent soft hiring scene might be a ‘new normal’ but it will take another quarter or two to confirm that. More and more of the hiring in 2016 seemed to consolidate among the largest employers. In Boston, those adding the most jobs included Wayfair, Amazon, HubSpot, Google and CarGurus. New York City saw a similar trend with much of its hiring among a few well-known brands that included Amazon, Google, Facebook, Indeed.com, Spotify, Blue Apron and Jet.com.” 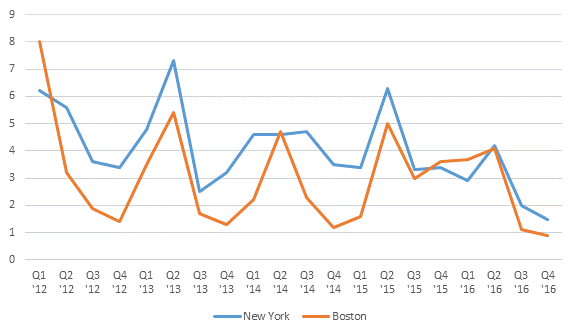 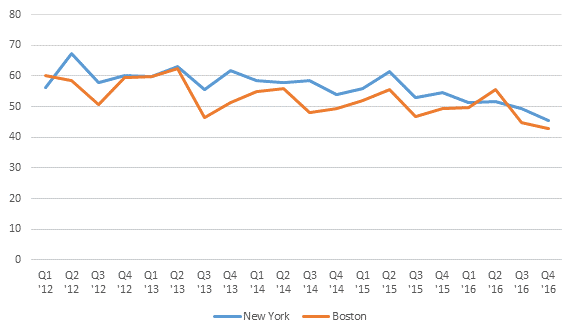 196 Internet and digital companies with 10+ employees in Boston

ON Partners surveyed only pure-play Internet and digital companies. Based on its research, the company believes that the businesses surveyed represent more than 90 percent of the Internet and digital employees in New York and Boston. Major digital sub-sectors covered include consumer Internet, small business Internet, advertising technology, consumer payments and marketing software. Excluded from the survey were digital-focused employees of “traditional” companies, consulting firms and digital ad agencies. ON Partners continually adds or subtracts companies for inclusion in the Index based on the criteria of employing 10 or more employees in either the New York or Boston metropolitan areas. ON Partners’ Digital Jobs Index is current as of December 31, 2016.