ON Partners (www.onpartners.com), the results-driven retained executive search firm, has compiled the results of its quarterly Digital Jobs Index, tracking tech hiring in Boston and New York. According to the latest data, both New York and Boston posted their worst third quarter hiring numbers in the past five years, since the survey started in 2012.

For New York, this past quarter was a continuation of what has been a clear hiring slowdown over the past 15 months. Boston, on the other hand, had been showing strong headcount growth in 2016 until the third quarter, when hiring demonstrated a sharp drop. If not for healthy headcount additions at Wayfair and Amazon, Boston would have seen its first quarterly headcount decline over the past five years in the digital sector.

ON Partners’ John Barrett observed, “The severity of the third quarter slowdown was a little unexpected. It’s hard to know if this was a brief aberration that will soon correct itself, if the election caused cold feet on the hiring front and/or if the reported slowdown in early stage VC investing has impacted hiring. The hiring data for Boston was especially concerning.”

New York’s “Top Ten” list had one newcomer: Yext. The City’s “Up and Comers” list had several new names including Ceros, Vroom, Newsela, NowThis and Rocketrip. There were multiple first timers on Boston’s “TopTen” list including Catalant, Disruptor Beam and Blueport Commerce. Boston companies making the “Up and Comers” list for the first time were SavingStar, Scout Exchange and Teikametrics. 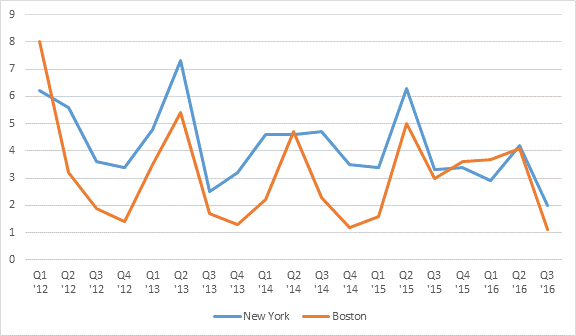 190 Internet and digital companies with 10+ employees in Boston

ON Partners surveyed only pure-play Internet and digital companies. Based on its research, the company believes that the businesses surveyed represent more than 90 percent of the Internet and digital employees in New York and Boston. Major digital sub-sectors covered include consumer Internet, small business Internet, advertising technology, consumer payments and marketing automation. Excluded from the survey were digital-focused employees of “traditional” companies, consulting firms and digital ad agencies. ON Partners continually adds or subtracts companies for inclusion in the Index based on the criteria of employing 10 or more employees in either the New York or Boston metropolitan areas. ON Partners’ Digital Jobs Index is current as of September 30, 2016.