ON Partners (www.onpartners.com), one of the country’s fastest growing retained executive search firms, has compiled the results of its quarterly Digital Jobs Index. New York City finished its worst first half hiring in the past five years while Boston had its best first half since 2013. The Digital Jobs Index currently tracks local hiring at 189 companies in the Boston area and 408 companies in the NYC area.

For the past several years, New York’s digital hiring easily outstripped Boston’s. However, now the two cities appear to be more in line with each other in terms of digital jobs creation.

John Barrett, a Partner at ON Partners, observed, “A surge in hiring at Google and Amazon in NYC helped salvage an otherwise soft hiring scene. The two companies added over 900 jobs in the Big Apple in Q2 which was approximately 40% of new headcount added to the city’s digital payrolls.” For the first half of 2016, digital headcount in the NYC area increased by about 7.1% which is well below the blistering first half hiring increases seen since 2012. This may be the “new normal” given that the Digital Jobs Index has indicated a slowdown in New York City that has persisted for the past 12 months.

Boston’s digital jobs headcount grew nicely in the first half, increasing by 7.8% which is easily the strongest first half hiring since 2013. Boston showed an increase in the number of companies adding jobs, demonstrating a continued healthy employment scene.

A noticeable trend shared by both cities is that very few new start-ups have emerged in either city in 2016 that are hiring in large numbers. This is likely due to the well-reported slowdown in Series A venture capital funding seen across the country. 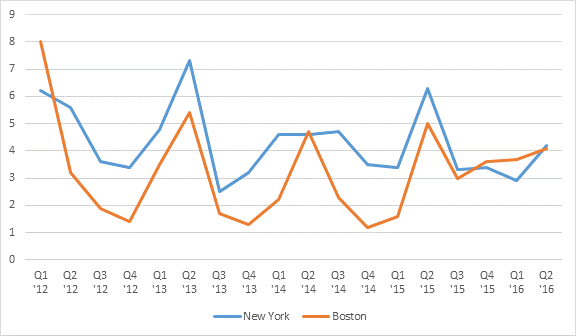 189 Internet and digital companies with 10+ employees in Boston

ON Partners surveyed only pure-play Internet and digital companies. Based on its research, the company believes that the businesses surveyed represent more than 90 percent of the Internet and digital employees in New York and Boston. Major digital sub-sectors covered include consumer Internet, small business Internet, advertising technology, consumer payments and marketing automation. Excluded from the survey were digital-focused employees of “traditional” companies, consulting firms and digital ad agencies. ON Partners continually adds or subtracts companies for inclusion in the Index based on the criteria of employing 10 or more employees in either the New York or Boston metropolitan areas. ON Partners’ Digital Jobs Index is current as of July 31, 2016.