John Barrett of ON Partners (www.onpartners.com), one of the country’s fastest growing retained executive search firms, has compiled the results of the quarterly Digital Jobs Index. Boston’s hiring activity remained surprisingly strong in the first quarter of 2016 while New York clocked in with its worst Q1 hiring performance since the Digital Jobs Index was created at the beginning of 2012.

Boston’s 3.7% growth rate was highly concentrated: the majority of it can be explained by the rapid growth of Wayfair, Amazon, HubSpot, TripAdvisor, CarGurus and Virgin Pulse. In fact, without these six companies doing a disproportionate amount of hiring, Boston would have shown signs of some hiring weakness. In other words, Boston’s strongest employers got much stronger while the rest of the field didn’t see much headcount growth.

On the other hand, New York City showed signs of a continuing slowdown that began last summer. The region turned in a mediocre performance in the first quarter with only 2.9% growth recorded in our survey. This was the worst Q1 performance recorded over the past four years. In fact, it was the worst quarterly performance overall notwithstanding the third quarter of 2013 that had only 2.5% growth. There were clear signs of retrenchment with fewer companies adding to their payrolls. It’s hard to know if this slowdown is temporary and it’s helpful to keep things in perspective: 2.9% quarterly jobs growth still isn’t terrible. However, it’s not quite in line with the torrid growth we’ve been seeing from the Big Apple over the past four years.

For New York’s “Top 10” list, Casper made it for the first time. For NYC’s “Up and Comers” list, there were several newcomers including CommonBond, Fiverr, Handy HQ, Codecademy, Interlude Ltd., WayUp, YouNow, Bloglovin, YieldMo and Persado.

Boston had no new names make it on to its “Top 10” list of largest hirers. In addition, there were few new names on the city’s “Up and Comers” list: TrueMotion and NewStore were the only new companies to make it. 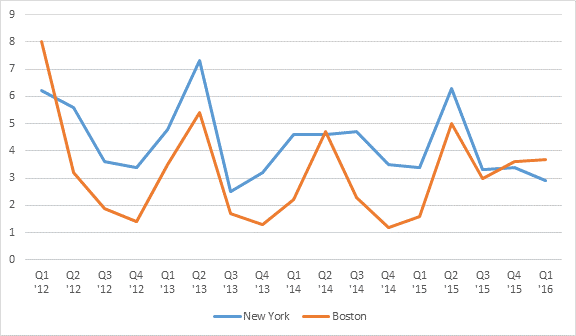 191 Internet and digital companies with 10+ employees in Boston

ON Partners surveyed only pure-play Internet and digital companies. Based on its research, the company believes that the businesses surveyed represent more than 90 percent of the Internet and digital employees in New York and Boston. Major digital sub-sectors covered include consumer Internet, small business Internet, advertising technology, consumer payments and marketing automation. Excluded from the survey were digital-focused employees of “traditional” companies and digital ad agencies. ON Partners continually adds or subtracts companies for inclusion in the Index based on the criteria of employing 10 or more employees in either the New York or Boston metropolitan areas. ON Partners’ Digital Jobs Index is current as of April 1, 2016.