CHIEF DIGITAL OFFICERS ARE LEADING THE CHARGE FOR CHANGE AMID DISRUPTION 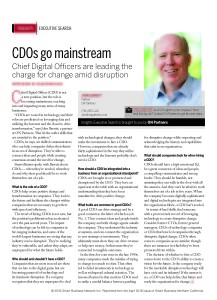 Chief Digital Officer (CDO) is not a new position, but the role is becoming mainstream, reaching into and impacting many arms of many businesses.

“CDOs are rooted in technology, and their roles are predicated on leveraging data and utilizing the Internet and the cloud to drive transformation,” says John Barrett, a partner at ON Partners. “But it’s the softer skills that are essential to the position.”

CDOs, he says, are skilled communicators who can help companies define their future in an era of disruption. They’re able to connect ideas and people while creating consensus around the need for change.

Smart Business spoke with Barrett about CDOs — when they’re needed, what they do and why their goal should be to work themselves out of a job.

What is the role of a CDO?
CDOs help create positive change and transformation at companies. They look to the future and facilitate the changes within companies that are necessary to get there with speed and efficiency.

The trend of hiring CDOs is not new, but the position’s proliferation has accelerated over the past several years. The impact of technology can be felt in companies in far-ranging industries, and some of the world’s largest businesses are seeing that any industry can be disrupted. They’re realizing they’re vulnerable, and unless they adapt, are unprepared for what the future holds.

Who should and shouldn’t have a CDO?
Companies that are most in need are those that are late to the digital game but are becoming paranoid of technology and its imminent disruption. If a company recognizes that they are unprepared to deal with technological changes, they should make the investment to hire a CDO. However, companies that are already fairly sophisticated in the way they utilize technology and the Internet probably don’t need a CDO.

How should a CDO be integrated into a business from an organizational standpoint?
CDOs are brought in or promoted and championed by the CEO. They have an equal seat at the table with an organizational understanding that they have been mandated to drive positive change.

What traits are common in good CDOs?
A good CDO can drive strategy and be a good connector, the latter of which is job No. 1. They connect ideas and people inside the company and with change agents outside the company. They understand the industry ecosystem, and can connect the organization to new startups or investments.

They ultimately must show they can drive revenue or help save money. In that sense they’re connected to tangible outcomes.

In the first dot-com wave in the late 1990s, many companies made the mistake of trying to change too much too fast. That often led to failed investments in technology as well as widespread cultural rejection. The lesson learned is that modern CDOs need to strike a careful balance between pushing for disruptive change while respecting and acknowledging the history and capabilities that exist in an organization.

What should companies look for when hiring a CDO?
CDOs should have a high emotional IQ, be a great connector of ideas and people, a compelling communicator and strong leader. They should be humble, not assuming they can walk in the door with all the answers. And they can’t be afraid to work themselves out of a job in five years.

When the company becomes digitally sophisticated and digital technologies are integrated into the organization fabric, a CDO isn’t needed.

In terms of hard skills, find someone with a proven track record of leveraging technology to create disruptive change. Consider former CTOs, former general managers, CEOs of technology companies or CIOs that have led companies through disruptive digital change. CDOs often come to companies as an outsider, though there are instances in which they’ve been promoted from within.

The decision of whether to hire a CDO comes down to the CEO’s ability to create a vision for the future. Is the company ready for the inevitable disruption technology will have on it and its industry? If the answer is no, a CDO can help define that future and ready the organization for change. ●