HOW OVERLOOKING CULTURAL FIT WHEN HIRING CAN HURT YOUR BUSINESS 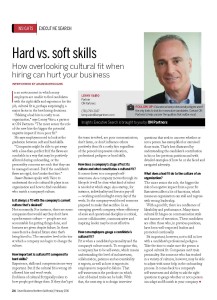 In an environment in which many employers are unable to find candidates with the right skills and experience for the job, cultural fit is, perhaps surprisingly, a major factor in the best hiring decisions.

“Making a bad hire is costly to an organization,” says Lenny Vairo, a partner at ON Partners. “The more senior the role of the new hire, the bigger the potential negative impact if it is a poor fit.”

He says employers need to look at the gradation between soft and hard skills.

“Companies might be able to get away with a less-than-perfect fit if the flaws are coachable in a way that may be positively affected during onboarding, or the personality concerns are such that they can be managed around. But if the candidate’s flaws are rigid, don’t make that hire.”

Smart Business spoke with Vairo to understand the role cultural fit plays in an organization and how to find candidates who match a company’s culture.

Is it always a fit with the company’s current culture that’s desired?
Not necessarily. For instance, there are some companies that would say they don’t have a performance culture — people are not accountable for getting things done, and bonuses are given despite failure.

In these cases, there’s a desired future state that’s being hired to. The executive level is the tier at which a company can begin to change the culture.

How important is cultural fit compared to hard skills?
Experience, skills and competencies are very important. But if the cultural fit is wrong, it’s a flawed hire and won’t work.

Problems of cultural fit typically relate to how people get things done.

If they don’t get the team involved, are poor communicators, don’t listen, or don’t influence others positively, then it’s a costly hire regardless of the person’s impressive education, professional pedigree or hard skills.

How does a company’s stage affect its culture and what constitutes a cultural fit?
It comes down to a company’s self-awareness.

As a company moves through its lifecycle, it will be clear what kind of talent is needed at which stage. As a startup, for instance, individuality and heroics pay off — working until midnight every day of the week.

So the company would need someone prepared to make that sacrifice. In an emerging growth company, where efficiency of scale and operational discipline is critical, a more collaborative, communicative and inspiring leader may be most effective.

To recognize this, a company has to be self aware, which means understanding the level of inclusiveness, collaboration, patience and accountability it expects, as well as how it expects its employees to respond to failure.

That self-awareness is the predicate on which a list of desired traits can be built. With that, the next step is to design interview questions that seek to uncover whether or not a person has exemplified or exercised those traits.

That’s best illustrated by understanding the candidate’s contribution in his or her previous positions and with detailed examples of how he or she faced and navigated adversity.

What does a bad fit do to the culture of an organization?
The more senior the role, the bigger the risk of a negative impact from a poor fit. Executives affect a lot of functions, which means an organization can stall and regress with the wrong leadership.

With a good fit, there is a confluence of likeability and performance. Many times cultural fit hinges on communication style and manner of execution. These candidates are often those who, in previous positions, have been well-respected leaders and promoted continually.

It’s important, however, not to fall in love with a candidate’s professional pedigree.

Take the time to make sure the person is a good cultural fit. Companies can’t train personality. But someone who has worked in a variety of cultures, however, may be able to adjust with some help in the onboarding process.

It comes back to a company’s self-awareness and ability to ask the right questions to gauge whether or not a person can adapt and flourish in your company. ●