LOOKING AHEAD AT EXECUTIVE SEARCH IN 2022

PRIVATE EQUITY & GROWTH SUCCESS: EXECUTIVE PLACEMENTS IN THE SECOND HALF OF 2021

CONSUMER SUCCESS: EXECUTIVE PLACEMENTS IN THE SECOND HALF OF 2021

BOARD SERVICES: EXECUTIVE SUCCESS IN THE SECOND HALF OF 2021

WHERE ARE THE EXECUTIVE JOBS IN PRIVATE EQUITY?

Q3 RECOGNITION OF DIVERSE LEADERS AND ORGANIZATIONS WITHIN THE ON COMMUNITY

SUCCESSFUL PLACEMENT: INTELYCARE – BOARD OF DIRECTORS

PART 03: LISTENING TO THE ON COMMUNITY TO MAKE MEANINGFUL DIVERSITY PROGRESS THROUGHOUT 2021 AND BEYOND

BEHIND THE EXECUTIVE TALENT SCENE IN ATLANTA: INSIGHTS FROM PARTNER JAKE ESPENLAUB

LABORERS IN DEMAND THIS LABOR DAY WEEKEND – ARTICLE FROM AJC FEATURING TARA FLICKINGER, PARTNER AT ON

ON PARTNERS EXPERIENCES 89% GROWTH; NAMED TO INC. 5000 FOR THE EIGHTH TIME

ON CONTINUES TO RECOGNIZE DIVERSE LEADERS AND ORGANIZATIONS WITHIN OUR COMMUNITY

AN EVOLVED OPPORTUNITY ARISES FOR EXECUTIVE MOMS POST-PANDEMIC – INSIGHTS FROM TARA FLICKINGER, PARTNER AT ON PARTNERS

PART 02: LISTENING TO THE ON COMMUNITY TO MAKE MEANINGFUL DIVERSITY PROGRESS IN 2021

IN GRATITUDE TO JOHN BARRETT, PARTNER AT ON PARTNERS

BEHIND THE SCENES WITH OPERATING PARTNERS

2021 FORECAST: EXECUTIVE RECRUITERS GET BACK TO BUSINESS – PUBLISHED IN HUNT SCANLON MEDIA

THE OPERATING PARTNER – 5 KEY TRENDS FROM TINDALL SEWELL, PARTNER AT ON PARTNERS

WHAT’S YOUR JOB COSTING YOU? 2021 TRENDS BY MARC GASPERINO

TOP FOUR CFO TRENDS IN 2021 – INSIGHTS FROM JOE OLSON, PARTNER AT ON PARTNERS

FROM CDO TO CEO: 2021 DIGITAL TRENDS BY MARC GASPERINO

PART 01: LISTENING TO THE ON COMMUNITY TO MAKE MEANINGFUL DIVERSITY PROGRESS

RECOGNIZING DIVERSE LEADERS AND ORGANIZATIONS WITHIN THE ON COMMUNITY

TOP 5 MOST POPULAR ARTICLES OF 2020 FROM ON PARTNERS

WHAT WILL IT TAKE TO BE A SUCCESSFUL CEO OR BOARD MEMBER IN 2021?

C-LEVEL JOB DEMAND SURGES IN SECOND HALF 2020: ON PARTNERS ANALYSIS

GRATITUDE TO THE ON COMMUNITY OF LEADERS IN 2020

BOARD EFFECTIVENESS BEGINS WITH DIRECTOR SELECTION – PUBLISHED IN BOARD LEADERSHIP JOURNAL

RANKED ONE OF THE MOST PROMINENT RECRUITING FIRMS IN NEW YORK

WHAT I’VE LEARNED AS A FIRST-TIME BOARD MEMBER

ON PARTNERS NAMED TO INC. 5000 AND PRIVATE EQUITY LIST; PARTNERS WITH LOXO

SALES AND MARKETING – EXECUTIVE SUCCESS IN THE FIRST HALF OF 2020

RACIAL DIVERSITY COMMITMENT FROM ON PARTNERS

ON VIEWPOINT SERIES: HOW WILL DEMAND FOR EXECUTIVE LEADERS CHANGE POST-PANDEMIC?

THESE 10 TECH COMPANIES HIRED THE MOST IN SF, NY AND BOSTON LAST YEAR – FEATURED IN FAST COMPANY

CREATING A MORE INCLUSIVE WORKFORCE IN THE INNOVATION ECONOMY – PARTNERSHIP WITH HACK.DIVERSITY

ADTRAN BOARD MEMBERS RECOGNIZED AS WOMENINC.’S 2019 MOST INFLUENTIAL BOARD DIRECTORS

BUSINESS INSIDER: THREE EXECUTIVE POSITIONS COMPANIES ARE RUSHING TO HIRE IN 2020 – ACCORDING TO ON PARTNERS STUDY

ON PARTNERS RELEASES FORECAST OF TOP EXECUTIVE JOBS FOR 2020

FINDING THE RIGHT CFO FOR THE ORGANIZATION

THE ENTERPRISERS PROJECT: SOFT SKILLS – 10 WAYS TO HIRE FOR THEM

CMS WIRE: THE PROS AND CONS OF HIRING A FRACTIONAL CTO

TOP EXECUTIVE MOVES IN THE FIRST HALF OF 2019

BOARD LEADERSHIP JOURNAL: 5 STRATEGIC TALENT IMPERATIVES FOR THE BOARDROOM

STEPHEN MADER TEAMS WITH ON PARTNERS BOARD SERVICES PRACTICE

CIO.COM: THE 9 HOTTEST JOBS IN IT

CMS WIRE: IS IT TIME FOR YOUR ORGANIZATION TO FORM AN AI ETHICS COMMITTEE?

ON PARTNERS RELEASES FORECAST OF TOP EXECUTIVE JOBS FOR 2019

BOSTON BUSINESS JOURNAL: HERE ARE THE TECH FIRMS HIRING THE MOST IN THE BOSTON AREA THIS YEAR

DO YOUR PORTFOLIO COMPANIES HAVE DIGITAL DNA?

SAN FRANCISCO BUSINESS TIMES: THESE 10 BIG BAY AREA TECH EMPLOYERS DID THE MOST HIRING IN Q3

TLNT.COM: 4 STEPS TO HIRING EXECUTIVES THAT WILL UP YOUR GAME

SUCCESSFUL PLACEMENT: RIA IN A BOX

ON POINT: WILL YOUR NEW HIRE SOLVE THE RIGHT PROBLEM?

ON DIGITAL HEALTH: WHEN WORLDS COLLIDE

ON PE HIRING: RIGHT PERSON FOR THE JOB

ON POINT: VC AND PE FIRMS ARE TARGETING MIDWEST TECH COMPANIES — HERE’S WHY

FIERCE CEO: COMPANIES NOT WALKING THE WALK WHEN IT COMES TO DIVERSITY, STUDY SAYS

FIERCE CEO: CEOS OWE IT TO COMPANY TO BE TECHNICALLY SAVVY

ON PARTNERS RELEASES FORECAST OF TOP EXECUTIVE JOBS FOR 2018

THE EVOLUTION OF WIRELESS

5 LIMITERS OF EXECUTIVE SUCCESS AND ADVANCEMENT

MICHAEL WURSTER, FOUNDER AND MANAGING PARTNER OF WURSTER PARTNERS, HAS MERGED WITH ON PARTNERS

ON PARTNERS RELEASES FORECAST OF TOP EXECUTIVE JOBS FOR 2017

RIGHT PERSON FOR THE JOB

THE ANATOMY OF A CFO

MODERN EXECUTIVE’S GUIDE TO WHAT RECRUITERS LOOK FOR

ON PARTNERS NAMED AS A TOP 20 U.S. SEARCH FIRM

STICK TO THE PLAN

THE ART OF REFERENCING

TAKE OUT THE GUESSWORK

MOTIVATION: WHY DO PEOPLE LEAVE?

ON SEARCH PARTNERS NAMED AS A TOP U.S. SEARCH FIRM

There has been a sharp rise in the number of New York start-ups actually decreasing their headcount. Specifically, almost 38% of the 396 companies from New York City covered in our survey reduced their employment levels in the third quarter. This is up from 27.6% in the second quarter and is the highest percentage of companies in decline we’ve seen in almost four years since this survey began. Boston is not showing any sharp changes in companies showing an employment decline, but the city also hasn’t had the amazing growth numbers that New York City has enjoyed.

John Barrett, a Partner at ON Partners, stated: “It is still too early to determine if New York’s torrid hiring spree is starting to soften, but this is a metric we will continue to watch closely. Perhaps it’s inevitable that NYC will start to slow down now that the tech sector has gotten so large there.”

New York’s Top 10 list includes AOL for the first time. It’s a pleasant surprise to see AOL hiring again after keeping its headcount more or less flat for years. Verizon’s acquisition of the company seems to have re-ignited its investment in human capital. Making their inaugural debut on NYC’s Up And Comers List is Casper, Crowdtap, x.ai, Harry’s Grooming, Moat, Adiant (owner of AdBlade), Pager, Paperless Post and Appboy. 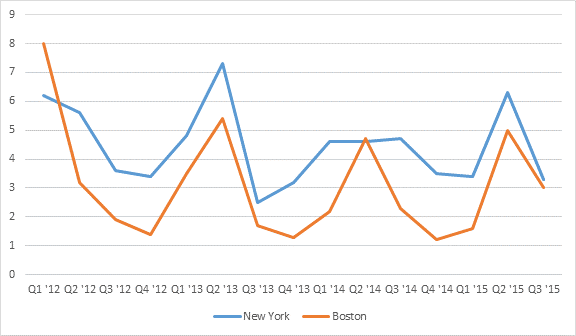 195 Internet and digital companies with 10+ employees in Boston

ON Partners surveyed only pure-play Internet and digital companies. Based on its research, the company believes that the businesses surveyed represent more than 90 percent of the Internet and digital employees in New York and Boston. Major digital sub-sectors covered include consumer Internet, small business Internet, advertising technology, consumer payments and marketing automation. Excluded from the survey were digital-focused employees of “traditional” companies and digital ad agencies. ON Partners continually adds or subtracts companies for inclusion in the Index based on the criteria of employing 10 or more employees in either the New York or Boston metropolitan areas. ON Partners’ East Coast Digital Jobs Index is current as of October 1, 2015.